Non-Standard Colors/Patterns - Does It Really Matter? 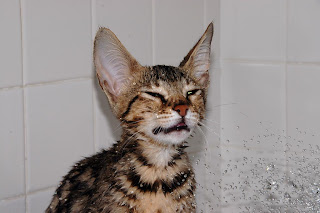 The aim of my breeding program is of course to produce cats closest to the Breed Standard for the Savannah breed. The reality of breeding is that not all cats turn out as expected, and things like recessive genes can result in kittens being born that are not of the color or pattern we might be aiming for. Generally speaking, Savannah breeders aim to produce cats that resemble the African Serval, and most Servals are of the Brown Spotted Tabby variety. They also occasionally are seen in the melanistic (solid black) and white form, and very recently a picture showed a very tiny spotted (Servaline) Serval kitten in the wild. The Savannah breed standard includes the Brown Spotted Tabby to represent the majority of Servals, but also the solid black to represent the black Serval. Years back when the first breed standard was presented to TICA, the breeders that were around then made a decision not to ask for the seal lynxpoint (colorpoint) tabby to represent the white Serval. They felt that a highly developed silver spotted tabby would be a better representation. Because of the way TICA (the International Cat Association, the cat registry) runs, by asking for solid (nonagouti) black AND silver then they also had to accept the solid version of the silver spotted tabby which is the black smoke.

Anyone that breeds more than a couple litters is likely to have a kitten that pops out that is not one of those four colors/patterns. Because of the domestic outcrosses used (the permissible ones during breed development were the Egyptian Mau, Ocicat, Oriental Shorthair and Domestic Shorthair, and then also Bengal was used quite some too), many of our Savannahs carry recessive colors/patterns: marble (classic), colorpoint (snow), chocolate, cinnamon and the dilute versions (blue, lilac and fawn). Additionally, the Orange gene can occur in Savannahs (red and tortie/torbie) and White, if cats were used along the way with those genes.

So in reality, there are many Savannahs out there that are not falling within the accepted colors/patterns of our Standard. What does this mean? Does this mean they are not Savannahs? Of course not, they have the same genetics as a BST except for coloring. Does this mean they cannot be used in a breeding program? That is a more serious question and truly depends on the comfort levels of the people running that breeding program. Some would say absolutely not. But then some would say if the cat is exceptional in type, it may be worth working with. TICA will register the Savannah no matter the color.

So what does it truly affect? Most obviously, it affects the ability to be shown. You cannot show a Savannah without it being one of the four accepted colors/patterns. So if your aim is to show, you need to purchase a Savannah that is BST, SST, black or smoke. If your aim is to produce show-worthy Savannahs then you also might need to consider this.

Personally, I have seen some very dramatic Savannahs in unusual colors or patterns that it is still clear what breed they are. So if I were a pet owner, I wouldn't overlook them as options. But I have never used a nonstandard Savannah in my program...I celebrate the ones born, like the picture above of Miss Trouble who is still one of my favorite kittens produced and was a lovely dramatic marble.

So what if you absolutely think that seal lynxpoint Savannahs (Snow Savannahs) should be accepted for show? TICA does have a process.... there are steps to follow to add a color or pattern to any breed. It takes effort, time and patience. A number of people have to show a number of cats in "New Traits", a special class at cat shows that allows your cat to be evaluated by judges against the Savannah breed standard. It's a thankless task, much like what many of us went through when showing the Savannahs through the new breed program for all those years leading up to acceptance into Championship. Once that criteria is fulfilled then the application can be made and the Savannah Breed Section will be polled to see if the majority agree that this should be added to the breed standard. And finally the TICA Board of Directors will vote on the issue. This process is the same for all breeds.

Why wouldn't everyone agree to adding a color or pattern? It seems obvious in the case discussed here that Snow Savannahs (Seal Lynxpoint Tabbies) come closer to representing the White Serval than the silver spotted tabbies do. So why wouldn't it be easy to justify adding it to our breed standard? Because it just isn't that simple. The way that TICA does things, if we applied to add the colorpoint gene then we would also be accepting all genetic combinations. As mentioned earlier, by accepting the solid black and the silver spotted tabby we thence also had to accept the black smoke as that is produced from the solid (nonagouti) gene with the silver (inhibitor) gene. So adding the colorpoint gene would mean not only accepting the seal lynxpoint tabby (which people generally like) but also the solid colorpoint (Siamese coloring), seal silver lynxpoint and smoke colorpoint. And many do not like the idea of allowing solid colorpoint Savannahs.

Interestingly, the Bengal breed faces a similar but reversed problem. There are some that would like to add the solid black Bengal to the breed standard, they love the black pantheresque look. BUT, adding solid black while they already accept the seal lynxpoint means that they also would be accepting the solid colorpoint Bengal, and nobody likes that idea. They'd also add smoke Bengals.
Posted by Unknown at 3:28 PM