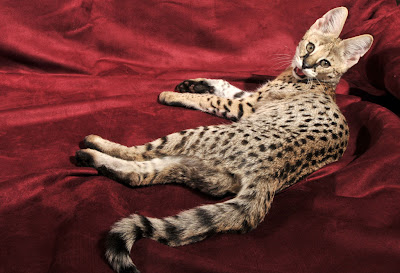 Meet AmazingGrace Tathinina of Kirembo, aka Nina, she's a 62.5% F1. She's simply amazing all-round... fabulous Servally looks with a great personality. She's that perfect mix of affectionate and crazy that we love in Savannahs. Busy busy busy, but then will curl up on the couch for petting and purrs.
We're excited to have her here, it doesn't "replace" Aziza in our hearts but does fill that hole in our program. She's also helping Baz as he had not found another friend quite like Z but he's been well-amused running about with Nina since she arrived so I am hopeful he'll have a new best friend very soon.
Posted by Unknown at 7:55 PM No comments: 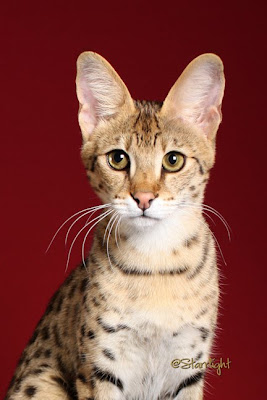 Recently I had one of the worst days of my life, I had to make a painfully hard decision to euthanize my gorgeous F1, Aziza.

Aziza had been "off" for some time, but I'd put it down to growing pains as she was growing fast (she was close to Baz's height) but excessively thin. She was a fussy eater, but I adapted and warmed her rabbit (a specific brand was required) and offered it multiple times a day. I just felt if I could get her eating all would be well. She seemed okay still, although not high in energy she was still playing and cuddling.

She had a vet appointment for the Monday, I wanted to do bloodwork and talk about stimulating her appetite, still not suspecting anything really wrong as she WAS eating a little, and drinking and no fever, puking or diarrhea to concern me. But on Saturday she really crashed, she wobbled when she tried to headbutt me. I ran her to the emergency vet and spent a few thousand on testing. Fluids did not cure the head bobbing, which I had assumed was dehydration. Her bloodwork was grim, the vet started saying dry FIP. Normally when a vet says FIP I am cynical, it's a standard response of many vets to a purebred cat looking ill. But this vet was well-informed, once she knew that I understanded the testing etc we had a good discussion on why it might be that and what other things it could be. She lost her kitten to dry FIP last year, she was very sensitive and caring.

The initial inhouse lab work came back that night, all blood testing indicated dry FIP as the most likely cause. Ultrasound showed that her kidneys and spleen were packing it in, they took biopies to look for lymphoma but it wasn't that. The internal medicine specialist was consulted (he was one of the specialists that saved my Millie Mousie some years back) and he sadly couldn't find an alternate diagnosis that fit the clinical picture. As the tests came back, the evidence just pointed only to dry FIP.

We discussed treatments, I read scientific articles about the promising treatment PI (polyphrenyl immunostimulant), use of steroids and antibiotics and homeopathic treatments. The one thing I noticed in all this was that the cats did not seem to have great quality of life throughout these treatments and "cures" were rare. There would be stabilization of condition but then "bad" episodes the cat would then be rescued from again. I started wondering if I would be putting Z through a lot of suffering simply because I couldn't accept the inevitable.

I went back in to visit Z and her condition broke my heart. She purred at me and we gazed in each other's eyes and I knew. She wanted to end this... she was ready to leave. Years before I had been in that back room of the emergency vet hospital with Millie Mousie but in that case Millie was not ready to go, so we did everything we could to help her survive (and she did), this was different. I realized that Z had been suffering long enough, she had just hidden it from me...and she had had enough.

I spent some time with her on my lap in a quiet room, and then the vet kindly and sympathetically came in and helped her slip away from us.

I've been a mess since and I am not over the grief yet, I've ceased my regular internet participation on the various Savannah email lists and I've holed up at home with the rest of the kitties. I still expect to see my Z around the house, and things keep reminding me of her. Missy has been disconsolate, she's been crying and searching the house for her sister. Baz has been needy of everyone, they all of course know how heartbroken I am. My poor husband, JN, was overseas on business so had to deal from a distance and I know it was hard on him. Z was one of those extra-special ones. I love all my pets dearly, but some worm their way deeper into your heart. Z and Missy are MY cats, they chose me. Z was special from the start, so sweet and maybe that was a sign that she was simply an angel.

Then the vet called to let me know that the tissue samples were PCR positive for FIP. It was a small relief to have it confirmed that way because I had been playing that "what if" game of guilt. FIP is a cruel disease, it affects cats of all breeds including those of mixed heritage. I'd always hated the disease, and known that one day it would affect me, it seems to hit every breeder at some stage in some way whether one of their kittens or a kitten they bring into their cattery. Please check out www.sockfip.org if you want to learn more and possibly donate to ongoing research projects. 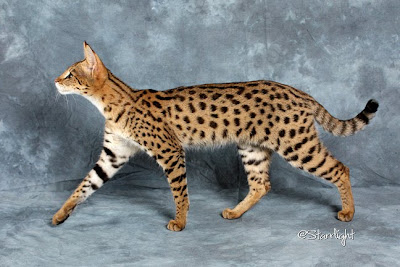 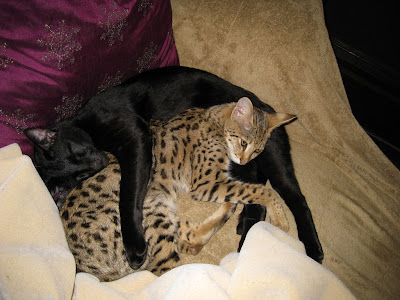 Z with her beloved Baz, they loved each other so much!
Posted by Unknown at 6:05 PM No comments: 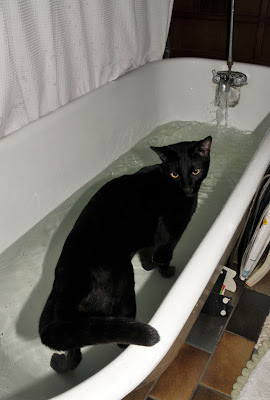 Baz is the third generation of Savannahs in this house that love our bathtub... not all Savannahs want to wade in water but some do and when they do they are very very keen on it! Baz is a solid black Savannah, he is Katie's grandson. 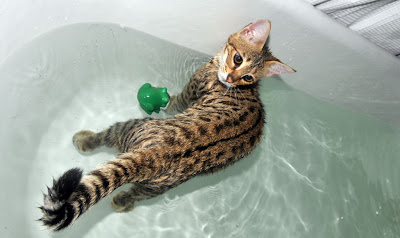 This is Khandi, Katie's daughter and also one that enjoys the bath...you can actually see a little movie on our website where the water is deep enough she can almost swim in the tub and she thought that fun also. We'd always wondered about that but had been limited by the height of the tub and so it had to be a kitten rather than adult to get the water deep enough. 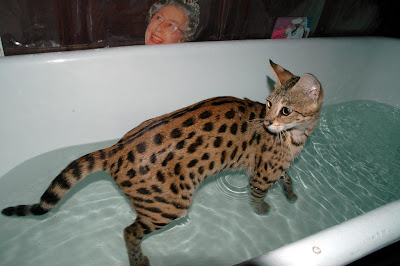 And the original bath monster here is Katie, she who could even turn those taps on for herself and lead to us having to keep that bathroom's door closed.
Posted by Unknown at 1:17 AM No comments:

The variety within Brown Spotted Tabbies 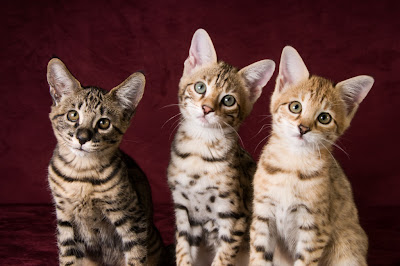 I find it really interesting to see, the very warm Savannahs are so pretty but I also like the dramatic look of a cool-toned Savannah, especially when they get that black nose like Nadiya has!
Posted by Unknown at 6:48 PM No comments: 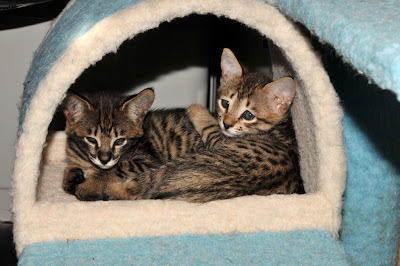 Kiki had two girls for us this time, they are both super-sweet and fond of my lap.

Don't let the "sad" eyes of the girl on the right fool you, she's full of mischief and confidence. In addition to great eyes she has wonderful earset and growing up very pretty. We love the dark dramatic looks of her sister too, it's still difficult to know which we shall keep, but I know I need to decide soon!
Posted by Unknown at 5:58 PM No comments: 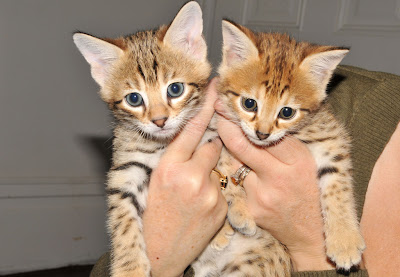 I've been remiss in updating the blog, there just never seems to be enough time in the day!

Both Katie and Kiki had babies recently and we're having such fun with the babies...so thought I'd post a couple of pictures of them.

Katie had a boy and girl this time, the first time she's had both sexes in a litter for us! The boy is on the left, his name is Kayode (meaning "he brings joy") and will be going down to LA to live. The girl is on the right, as yet unnamed but staying right here! They're very sociable kittens, they run to anyone that comes through the door wanting cuddles and play. Mama Katie is most proud of them, she's a fabulous mother.
Posted by Unknown at 5:53 PM No comments: