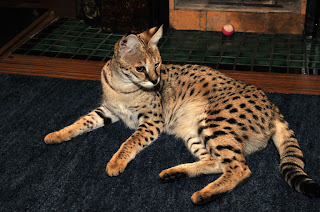 I noticed that my last post on the blog was two years ago, when I'd just traveled home from North Carolina with our Nina... so thought an update was appropriate.

Nina is an amazing F1, she's huge (well very tall, I don't think weighs more than 17lbs) and she's so very exotic looking but she's not at all what people expect when they think "wild", she's malleable. I've taken her to many shows in her couple years of life, and people are amazed when I just haul her out of the show cage and hold her there. She may give little mews of protest about it, but she tolerates it. She's been plonked on judges' tables (during lunch times) and been examined and admired and behaved perfectly. It is my fault though that because I dragged her to so many shows, she really tries to avoid people when they visit our home. She's sick of being on display I think :-(

What surprises people is that Nina is NOT a dominant personality, that is reserved for the more petite Savannahs in my household. Nina hisses, she definitely got the Servally propensity to hiss but also the second part of the "hiss and run" characteristic of the Serval. She's not assertive, with cats nor people.

Nina is not the one in the house that demands a raw diet either, because that is another assumption people make about F1s. She eats canned food as happily as raw meat, and she is the only one that tries to steal cooked human food here. The others lose interest with any meat once we start cooking it.

Nina is often quite ridiculous, when happy she not only gets the fluffy tail of happiness but she wags it about like a dog will. She will wriggle with glee flipping the tail about and she just makes us laugh. She will do this if she has a reasonable expectation of me picking up her favorite wand toy and playing with her. Especially if there are no other kitties to dominate play...because as I say, she is not assertive and so will always sit back if someone wants to play.

And for those asking about kittens from her, yes we want her to have babies, but no we've not managed it yet. I can't wait to see her babies, I know they will be as exciting as she is :-) 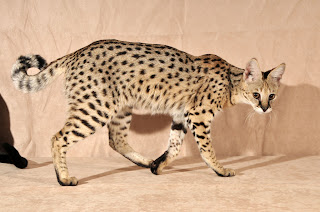 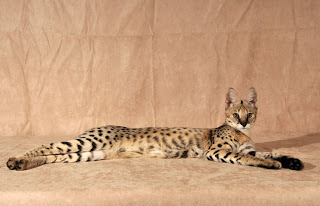